Big expansion in the future! 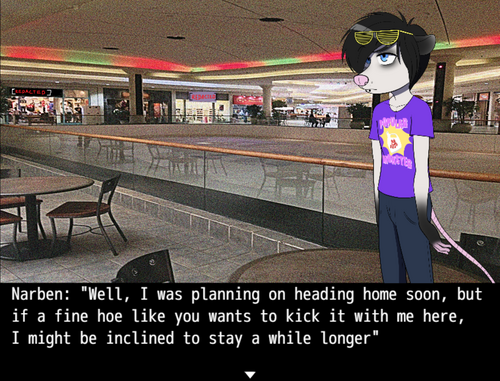 Just putting word out that there is a large expansion in the works for Heart of Dixie, which will be a completely separate story where you play as a girl and get to meet and date 3 different guys.

In the screenshot, you can see Narben, the Emo crunkcore musician who knows hes a pretty big deal, even though nobody buys his records.

In addition, we will be having Ashton Hunter, a femboy deer who loves being Country, but cant stand getting dirty.

And finally Johnny Silva, the punk guinea pig who doesn't take crap from anyone and may actually be a psychopath.

At the moment Im planning on each guy actually having their own storyline , and Narben's is almost complete.

This large game expansion can be yours in the future for the low price of: Owning the base game Heart Of Dixie.  Thats right, gonna be entirely free, although I might raise the price of the game by a dollar or two.

Get Heart of Dixie